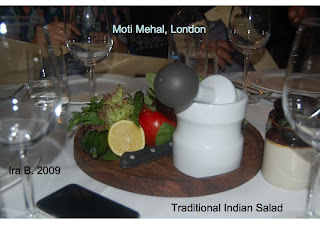 This occasional blog continues! We are just back from London, where we and a large group of others visited the famous friends in London for an auspicious family event. Surprisingly, it didn't rain till our last night there! While London, despite its residents claims, will never be known for its excess of quality food, there is some stuff out there if you try (really try). Our best meal while we were there was at Moti Mahal (45 Great Queen Street, Covent Garden, London WC2B 5AA, T: +44 (0)20 7240 9329 ), which is right by Covent Gardens.

The restaurant is clearly an upscale affair, with prices to match (it is London, after all). The seats are great, and it is easy to carry on a conversation. About the only thing I didn't love was the menu, which is designed as sort of a Mogul travelouge but is sort of confusing. Fortunately, we were with some Indian friends, who took over the ordering process (and I would say did an excellent job). Unfortunately, even though I have a copy of the menu, I am trying to reconstruct what we ate as much as possible.

First the good. The dal, relishes (included with the meal), bread and raita are quite good. The grilled lamb (49 pounds per kilo!!) is excellent. I was not a huge fan of the chooza (butter chicken) but it is clearly the right choice for the under 18 set. Chauchori, which is a mix of potatoes and baby eggplant, is not to be missed. Nor is the Bhala Papadi Chaat, which is a mix of pastry bits, chick peas, yogurt and mint chutney. If you are a fish fan, the Meen Polichathu, which is baked seabass and crabmeat served in a banana rapper.

Now the not so good. Its a short list, but the biryani, at 19 pounds, was small, not very good, and, clearly, quite pricey.

If you are going to London and want a decent meal do not miss Moti Mahal. I don't think I've had Indian food this good in New York. If you do know a place, let me know.
Posted by Ira.B at 8:13 PM

When you buy a pair of shoes fromOnitsuka Tiger Shoes, another pair is donated to needy children in different parts of the world. The lack of Tiger Shoes can contribute to the spread of disease and the prevention of educational opportunities, and the company aims to reduce those problems with its mission. Louis VuittonYou can find comfortable slip-ons or even lace-up boots. The classic true religionstyle is a functional, slip-on canvas loafer.Vibram Five Fingers Shoes

Beautiful blog. Thank you for this wonderful sharing. Keep sharing.

Have Male Martha EMailed to You Directly!